Type 2 diabetes which used to be known as middle aged diabetes, is the most universally widespread form of diabetes, but the causes of type 2 diabetes are not clear cut they are caused by a combination of factors, which include insulin resistance, this condition occurs when your liver, muscles and fat cannot use insulin.

One of the causes of Type 2 diabetes develops when the body can no longer produce enough insulin to compensate for the impaired ability to use insulin. Symptoms of type 2 diabetes may develop gradually over a long period of time, and they can be subtle; some people with type 2 diabetes remain undiagnosed for years. Fifty years ago diabetes was called the silent killer because often it did not present symptoms until it had developed to the complications stage.

Causes of type 2 diabetes are not fully understand, but non the less there are some fairly accurate pointers. Type 2 diabetes develops most often in middle-aged and older people who are also overweight or obese. The disease, once rare in the young is becoming more common in overweight and obese children and adolescents. Scientists think genetic susceptibility and environmental factors are the most likely triggers of type 2 diabetes.

Genes play a significant part in susceptibility and causes of type 2 diabetes. Having certain genes or combinations of genes may increase or decrease a person’s risk for developing the
disease. The role of genes is suggested by the high rate of type 2 diabetes in families
and identical twins and wide variations in diabetes prevalence by ethnicity. Type 2
diabetes occurs more frequently in African Americans, Alaska Natives, American
Indians, Hispanics/Latinos, and some Asian Americans, Native Hawaiians, and Pacific
Islander Americans than it does in non-Hispanic whites. 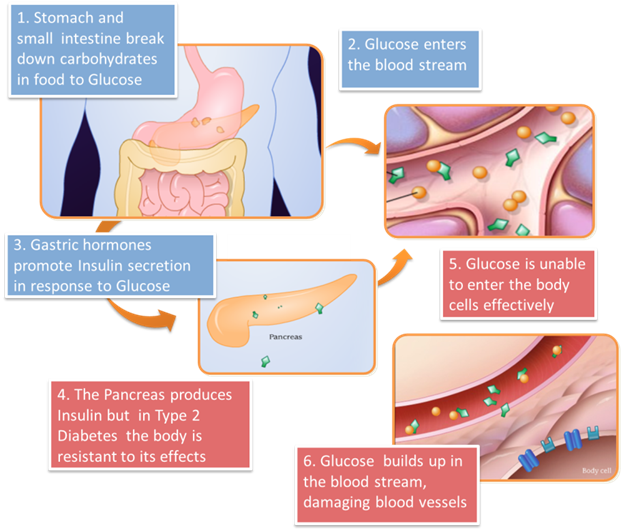 Recent studies have combined genetic data from large numbers of people, accelerating
the pace of gene discovery. Though scientists have now identified many gene variants
that increase susceptibility to type 2 diabetes, the majority have yet to be discovered. It is unlikely that there is one diabetic gene which causes type 2 diabetes. The known genes appear to affect insulin production rather than insulin resistance. Researchers are working to identify additional gene variants and to learn how they interact with one another and with environmental factors to cause diabetes.

Studies have shown that variants of the TCF7L2 gene cause type 2 diabetes. For people who inherit two copies of the variants, the risk of developing type 2 diabetes is about 80 percent higher than for those who do not carry the gene variant.1 However, even in those with the variant, diet and physical activity leading to weight loss
Genes can also increase the risk of diabetes by increasing a person’s tendency to become
overweight or obese. One theory, known as the “thrifty gene” hypothesis, suggests certain genes increase the efficiency of metabolism to extract energy from food and store the energy for later use. This survival trait was advantageous for populations whose
food supplies were scarce or unpredictable and could help keep people alive during
famine. In modern times, however, when high-calorie foods are plentiful, such a trait
can promote obesity and type 2 diabetes.

However modern research at Newcastle university is identifying one of the causes of type 2 diabetes as a result of crossing your personal fat threshold.This would account for the fact that some obese people will never develop diabetes.

Physical inactivity and obesity are strongly associated with the development of type 2
diabetes. People who are genetically susceptible to type 2 diabetes are more vulnerable
when these risk factors are present.

An imbalance between caloric intake and physical activity can lead to obesity, which
causes insulin resistance and is common in people with type 2 diabetes. Central obesity,
in which a person has excess abdominal fat, is a major risk factor not only for insulin
resistance and type 2 diabetes but also for heart and blood vessel disease, also called
cardiovascular disease (CVD). This excess “belly fat” produces hormones and other
substances that can cause harmful, chronic effects in the body such as damage to blood
vessels.

The DPP and other studies show that millions of people can lower their risk for type 2
diabetes by making lifestyle changes and losing weight. The DPP proved that people
with prediabetes—at high risk of developing type 2 diabetes—could sharply lower
their risk by losing weight through regular physical activity and a diet low in fat and
calories. In 2009, a follow-up study of DPP participants—the Diabetes Prevention Pro-
gram Outcomes Study (DPPOS)—showed that the benefits of weight loss lasted for at
least 10 years after the original study began.

Insulin resistance is a common condition in people who are overweight or obese, have
excess abdominal fat, and are not physically active. Muscle, fat, and liver cells stop
responding properly to insulin, forcing the pancreas to compensate by producing extra
insulin. As long as beta cells are able to produce enough insulin, blood glucose levels
stay in the normal range. But when insulin production falters because of beta cell
dysfunction, glucose levels rise, leading to prediabetes which can develop into full blown diabetes.

Abnormal Glucose Production by the Liver

For reasons not completely understood, in many people with diabetes, glucagon levels stay
higher than needed. High glucagon levels cause the liver to produce unneeded glucose,
which contributes to high blood glucose levels. Metformin, the most commonly used
drug to treat type 2 diabetes, reduces glucose production by the liver.

The Roles of Insulin and Glucagon in Normal Blood Glucose Regulation

When blood glucose levels rise after a meal, the pancreas releases insulin into the blood.

When blood glucose levels drop overnight or due to a skipped meal or heavy exercise, the pancreas releases glucagon into the blood.

• Glucagon signals the liver and muscle tissue
to break down glycogen into glucose,
which enters the bloodstream and raises
blood glucose levels.
• If the body needs more glucose, glucagon
stimulates the liver to make glucose from
amino acids.